A near merger, Hagan makeover and faculty on the air

The Reformation – Sowing the Seeds

Coming to the Colonies – The Swedes in Philadelphia

Pastorius & the Establishment of Germantown

The Civil War – A Seminary is Formed

The Move to Mount Airy

The Teens through the Thirties: Frustration & Expansion

Vietnam through a Generation of Change

Transitioning to the Twenty-First Century

Into the Aughts – A New Era & Renewed Campus

A near merger, Hagan makeover,
and faculty on the air

Still more change characterized the 1960s and 1970s, as the nation transitioned from civil rights to the Vietnam Era. Faculty member Robert Bornemann, Professor of Old Testament, developed a seminary choir which annually toured the region. He also earned regard as a Middle East archaeologist. The faculty became more diversified and ecumenical. Professor William Lazareth continued a Mt. Airy tradition of contributing to the wider church through the social statements of the Lutheran Church in America. A plan to merge with Gettysburg Seminary on a campus in Philadelphia’s University City, near the University of Pennsylvania, advanced considerably, but failed in the end. A makeover of the Hagan Center provided for a gymnasium, faculty offices, and an auditorium – much needed for larger classes.

Faculty were becoming more engaged in the political and community dynamics of Philadelphia. The broadcast contributions of President John Vannorsdall (The Protestant Hour) and professor Edmund Steimle (The Lutheran Hour) continued a seminary member mass media tradition begun early in the school’s history when Charles Porterfield Krauth served as an editor of The Lutheran Observer, predecessor publication to The Lutheran magazine. And the student body began to include women in its MDiv program. Watch and listen as Professor Emeritus LeRoy Aden and his spouse, Ruth, Martha Reumann, and alumnus Steve Jensen share recollections. 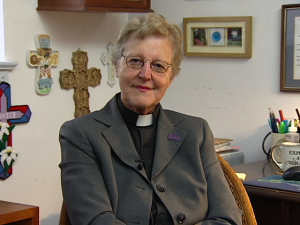 The Rev. Martha Kriebel, first woman to receive a degree from LTSP in 1965.
Click to learn more about her story and experience.