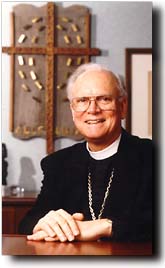 A native of Los Angeles, Anderson graduated Phi Beta Kappa from Yale University (1953). Anderson became widely known as an author and translator of works on Lutheran history. He served many years on the faculty of Lutheran Theological Southern Seminary, Columbia, SC, and was President of the school from 1970 to 1982. In 1982 he began 14 years of service as President of Luther College in Decorah, IA., and held that post at the time he was elected ELCA Presiding Bishop.