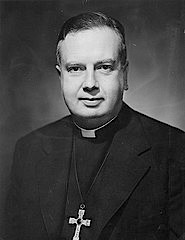 Franklin Clark Fry, ’25, is remembered by many as the most prominent and influential U.S. Protestant leader of the 20th century. Elected President of the former United Lutheran Church in America (ULCA) on the fourth ballot in 1944, Fry was a prime mover behind the establishment of the Lutheran World Federation in 1947, the World Council of Churches (1948) and the National Council of Churches (1950). He presided over the constituting convention of the National Council and headed the central committee of the World Council. He described the World Council “as a means to hold Christianity together … to keep the conversation going even if there is no success in our lifetime.” He became President of the 72-million-member Lutheran World Federation in 1957. He was ambivalent at first about his election as ULCA President, saying he would “much rather have a pastorate than squirt grease into ecclesiastical machinery.” 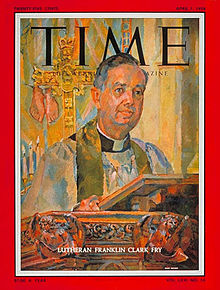 Dubbed frequently as “Mr. Protestant” as the partial result of prominence gained through an April 7, 1958 cover article in Time magazine, Fry was described in the feature as having a “phenomenal memory, a lawyer’s avidity for meticulous briefing and relentless persistence.” After his death in 1968 due to cancer suffered in the midst of his second LCA term, the Los Angeles Times wrote Fry was “known everywhere for his parliamentarian tactics, his shortcutting of time-consuming wrangles, the pungency with which he cut through intricate debate snarls, and for his wit and incisive dominance of any situation.”

Fry sharpened many of his intellectual tools at the seminary, but not always in a typical way. A Phi Beta Kappa graduate of Hamilton College, Fry and other classmates disapproved harshly of the inferior training they received at the still young seminary.

“I recalled that as a seminarian Franklin Clark Fry had been a brilliant student, faithful and conscientious in his work, and even in class attendance, but highly critical of the curriculum and of many members of the faculty,” said the Rev. Dr. Luther D. Reed, who gave remarks about Fry’s seminary years during a dinner honoring the ULCA leader in 1955. Reed, eminent professor of liturgy at the school, its librarian and its President (1938-45), shared his remarks in a chapter found in Franklin Clark Fry: A Palette for a Portrait, a 1972 supplementary number of the Lutheran Quarterly, edited by Robert H. Fischer.

“It had been fully expected that his father, Dr. Franklin Foster Fry, would be elected to succeed his grandfather, Dr. Jacob Fry, as professor of practical theology in the Philadelphia Seminary,” Reed said. “When the board of directors met, however, for some reason unknown to me, they elected Dr. John Conrad Seegers to this position. Franklin Clark Fry took this as an insult to his family, and he came to the seminary with chips on both shoulders. He himself had the advantage of excellent education with a year as graduate research assistant in Athens (Greece)….He soon detected weaknesses in the curriculum and the faculty and openly showed his scorn of both, while meticulously meeting all requirements of the institution.

“As one of his professors…I somehow escaped his sharp-barbed criticism. We then and there shared a close friendship, which endured unbroken until the day of his death.”

Fry told Time of his seminary years: “Inadequate instruction was the problem. I already had a firm grounding in the faith, but the defense of it presented by the professors didn’t begin to match the caliber of the archaeology instruction I’d had at Athens. I got very impatient with the seminary, but it made me think.” 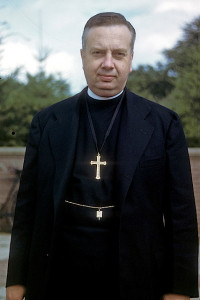 In the volume Mr. Protestant, a collection of tribute chapters for a small book, assembled as a surprise for Fry’s 60th birthday, classmate the Rev. Harry J. Kreider, Jr., was more colorfully blunt about seminary education in the Fry years. “A few of the professors we really learned to love and esteem, not only because they were good in their field, but particularly because they were scrupulously honest intellectually and deeply spiritual. But too many were of another kind, who gave little evidence of working hard themselves and who covered up their shortcomings with bombast and chaff.”

Kreider wrote of Fry…”his was a sobering influence on those of us who were pretty bitter about being cheated out of a good theological education. If Fry, head and shoulders above most of these ‘teachers,’ could be diligent in class attendance and note-taking, who were we to do otherwise? So many a rebellious feeling within us was curbed.”

Fry headed the student body during his seminary days and led a movement to advise the faculty on curriculum revision. “The seminary has caught up with him now,” Reed, then President Emeritus of LTSP, told Time in 1958. “He was simply ahead of the faculty in those days.”
With stringent modern-day accreditation standards leading to frequent curriculum changes and demanding standards, it would be hard to imagine such a harsh critique today.